Hi, my name is Louie. But sometimes my owner calls me Little Louie, Lou Lou, Buddy, Stinker… you get the gist.

Hi, my name is Louie. But sometimes my owner calls me Little Louie, Lou Lou, Buddy, Stinker… you get the gist. And she expects me to respond to every single one?? Good luck remembering them all, because I surely don’t. My owner definitely believes she is the “boss” of me but little does she know that I run the show. After all, I am kind of a big deal. Let me show you what a typical day in my shoes looks like. 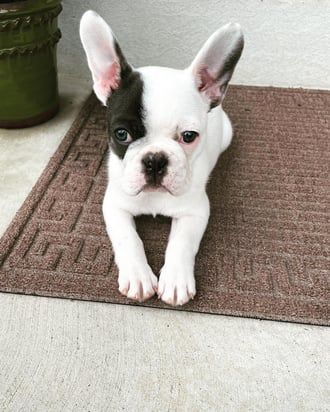 I was surrounded by waffles, chicken, mashed potatoes, and gravy. Oh boy, oh boy… What do I dig into first?! I was jumping up and down with pure excitement when I suddenly heard a loud crash, and my eyes jolted open. Ugh, not again… it was just a dream! What a bummer.

To make matters worse, my owner looks at me and says, “C’mon Louie! Let’s get ready for work!” I seriously hope she’s kidding. I laid my head back down, and slowly started to drift back to sleep. A few moments later, I wake up to my owner lightly shaking me and calling out my name over and over again. I guess she wasn’t kidding…

Ever since being promoted to Mascot at Beltone, work has been so demanding and exhausting. If it weren’t for all the extra belly scratches and doggy biscuits my employees give me, I would have never agreed to this whole “mascot” thing in the first place.

You’re probably wondering how I got into the hearing aid business. I honestly have no idea how this happened myself. But, I think it may have all started with my Aunt Taryn many, many years ago. From what I’ve heard, she was extremely sick as a baby. The medicine she needed to feel better again, caused her to lose her hearing. Taryn received her first pair of hearing aids by the time she reached kindergarten. Sometimes, when I bark at Taryn, she doesn’t always hear me. At first I was very confused when this would happen, but then I realized it was because she wasn’t wearing her hearing aids. They make such a big difference!

Anyways, fast forward a couple years, my Pappy became so interested in Taryn’s situation, he quickly learned that he wanted to help others experiencing similar problems. He ended up making a career out of it, and opened his own hearing aid practice. Pretty cool, right? 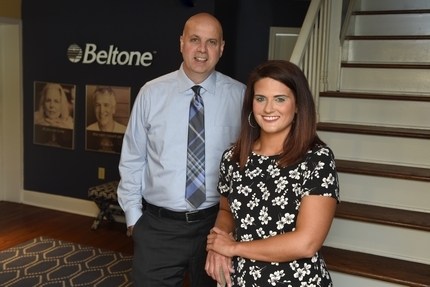 My parents were absolutely shocked when my preschool teacher told them that she thought I wasn’t hearing in class. They refused to believe it.

Get notified of new Beltone offerings

Technology is constantly changing. Signup to receive exclusive offers and information available only to our subscribers.