Age-related hearing loss is pretty common. About a quarter of people between the ages of 55 and 65 have some hearing loss. As much as half of the population over the age of 65 are dealing with hearing loss in some form or another.

Not being able to hear well can hurt your overall quality of life. You might miss out on conversations with friends and family, or you might not be able to understand directions. It might be more challenging to enjoy events that take place in crowded areas or to appreciate movies or live plays. Hearing loss can make things more challenging at work as well.

A variety of factors can cause or contribute to hearing loss. In some instances, sounds and voices might seem muffled because you have an excess amount of earwax in the ears. Removing the earwax often helps restore hearing.

Infections, tumors or damage to the eardrum can also cause hearing loss. Long-term, gradual damage to the ears can also lead to hearing loss. For example, going to loud concerts repeatedly over the years can wear out the cilia, or tiny hairs, in the ear canal or can damage the nerves in the cochlea. The damage to the hairs or nerves makes it more difficult for your ears to conduct sounds.

What Are the Symptoms of Hearing Loss?

The primary symptom of hearing loss is the inability to hear sounds. But that difficulty can take several forms depending on the type of impediment. Some of the signs that a person is having trouble hearing include:

Some sounds become particularly challenging to hear with certain types of hearing loss.

For example, people who have trouble hearing higher pitches or who have lost the ability to hear at high frequencies might not be able to discern the following sounds:

Usually, older people who are beginning to notice the symptoms of hearing loss will adopt certain behaviors as a way to compensate for their difficulties or to deny that the issue is occurring. One prevalent sign that a person is dealing with hearing loss but doesn't want to admit it is if he or she decides to cut out specific life activities, such as participating in social groups or going to the movies.

Another way that people might compensate for not being able to hear is to pretend that they do hear and bluff their way through conversations. For example, a person who was once very chatty and talkative might become quiet and might nod through discussions instead of jumping in.

Often, when an adult is dealing with hearing loss, it's another adult, such as friend or family member, who is the first to speak up. The friend or relative may point out that the person plays a radio or TV too loudly or note that the person talks louder than others in a group setting.

The symptoms of hearing loss are often slightly different in adults than they are in children. Children who are unable to hear might struggle in school and even be diagnosed with a learning disorder or behavioral problem when the reality is that he or she just can't hear. 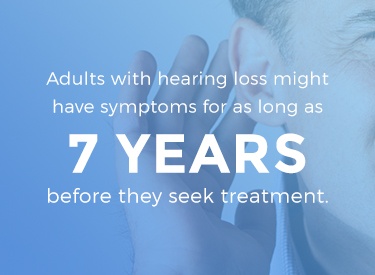 
What Are the Levels of Hearing Loss?

Hearing loss occurs on a spectrum, or in a range. Some people might have a mild degree of hearing loss, while others might be completely deaf. Before you can understand the different levels of hearing loss, it helps to know how sound is measured.

A decibel is a unit of sound. It's a measurement that describes how loud or powerful a noise is when a person is standing near it. For people, the decibel range starts at 0 and goes up to 140.

Here are a few examples of common sounds and their decibel rating:

For example, think of the last rock concert you attended without wearing ear protection. When you left the venue, it's very likely that you had a tingling or ringing feeling in your ears — because you just spent a few hours listening to sounds at around 120 dB.

Sounds that measure 140 dB occur at what's called the "threshold of pain." These sounds are so loud that they can cause immediate hearing loss and actual physical pain.

While decibels measure how loud sound is, hertz measures its frequency or pitch. The range of hertz found in human speech is between 250 Hz and 8,000 Hz.

When people get their hearing tested, the decibel range and hertz are measured together to determine the level of hearing loss.

Hearing loss can occur in several different degrees. Here’s what each level means and how it affects life:

How Is Hearing Loss Diagnosed?

Several methods can be used to diagnose hearing loss. One of the first things a doctor might do if he or she suspects that you're dealing with hearing loss is examine your ears.

A physical exam of the ears can reveal if there's an issue with them that is contributing to your hearing issues. For example, in some cases, a buildup of earwax can block the ear canal and muffle sounds.

Although the usual advice is to let earwax be, if you have an abundance of it, your doctor might remove it to see if that improves your hearing. Usually, if earwax is the problem, you'll be able to hear better the instant the doctor scoops it out.

The physical exam might reveal other ear issues contributing to hearing loss. For example, tumors in the ear can block the canal and interfere with hearing. If you're dealing with an ear infection, inflammation or swelling in the middle ear can also create hearing difficulties.

If a physical exam doesn't reveal anything unusual in the ears, your doctor might recommend a screening test to evaluate your hearing. An audiologist can also perform the screening.

What to Do About Hearing Loss in One Ear

It's not uncommon for people to lose hearing in one hear and not the other. Hearing loss in one ear is also called "unilateral hearing loss" or "unilateral deafness." It can come on suddenly or develop gradually.

Several things can cause you to lose hearing in one ear, such as injury or a tumor in the ear. In some cases, illness can cause the hearing loss, as can taking certain medications to treat diseases. Medicines that can contribute to hearing loss include certain antibiotics, chemotherapy, diuretics, and taking too much aspirin.

Hearing loss in one ear can also be a symptom of Meniere's disease, a disorder that causes feelings of dizziness and ringing in the ears. Meniere's disease occurs when there is a buildup of fluid in the inner ear, but the specific cause of the disease isn't known.

Usually, doctors prescribe medication, lifestyle changes and injections to treat this issue. While the medications and injections can help relieve the symptoms such as dizziness, they can occasionally make hearing loss worse. In some instances, people with Meniere's disease get better on their own.

For example, losing hearing in one ear can interfere with your ability to hear sounds coming from one direction. If your left ear isn't functioning well, then in the event you're crossing the street and a car comes speeding towards you on the left, you won't be able to hear it. You also won't be able to hold a phone to your left ear during calls.

You might also benefit from wearing a hearing aid in the affected ear if the hearing loss isn't a result of a disease or other fixable factor.

What to Do About Sudden Hearing Loss 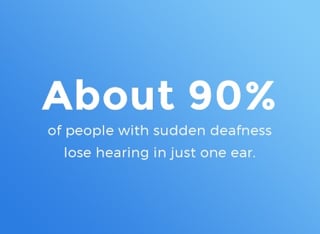 Sudden hearing loss isn't too common, as it typically affects fewer than 30 out of 100,000 people each year. About 90 percent of people with sudden deafness lose hearing in just one ear.

To consider yourself as suffering from sudden hearing loss, you need to have a hearing reduction of greater than 30 dB over the course of 72 hours. You might notice that you're not able to hear a conversation on the phone, or it might seem as though the people you are speaking with are whispering, even if they are talking at a regular volume.

In some instances, people with sudden hearing loss hear a "pop" in their ears right before they are unable to hear anymore. Some people also have dizziness or a ringing in their ears.

Like unilateral hearing loss, sudden deafness can have one of many causes. The tricky thing about it is that the reason is clear in only about 15 percent of cases. The majority of cases of sudden deafness have no known cause.

Identifiable causes of sudden hearing loss include the following:

Your doctor will likely perform a physical examination, as well as one or more of the hearing tests described above, to determine the cause and degree of sudden hearing loss. He or she might also perform imaging, such as an MRI, to see if any problems with the ear's anatomy could be contributing to the hearing loss.

One of the most common ways to treat sudden hearing loss is with corticosteroids. Steroids help to reduce inflammation and swelling, which can be helpful if there's inflammation associated with the hearing loss. Usually, the steroids come in pill form, but there are cases when they are injected directly into the middle ear.

Occasionally, sudden hearing loss clears up on its own, without any additional treatment. When the cause isn't known, it's fairly common for hearing to return after about two weeks.

In cases where an ototoxic drug, such as antibiotics or chemotherapy, causes damage, the hearing loss might be permanent. Ototoxic drugs can damage the sensory cells found in the ear. Some people have genes that make them more likely to experience hearing loss when they take certain types of medication.

Since sudden hearing loss can be one of the first symptoms of a long-term condition, it's imperative to see a doctor as soon as possible for full diagnosis and treatment.

Where to Go for a Hearing Test Evaluation

Although it's important to see a doctor in the case of sudden hearing loss, an audiologist can evaluate and diagnose other types of hearing loss, such as hearing loss due to aging. Beltone offers free hearing evaluations to people who are concerned about the state of their hearing.

A hearing test evaluation at Beltone usually involves three steps. An audiologist will first examine your ears. During the exam, the audiologist will use an otoscope to look in the ears to see if there are any signs of damage or any physical defects or abnormalities.

The audiologist will also ask you some questions about your hearing to get a sense of the degree of loss or how long you've been experiencing the issue. Next, the audiologist will perform air and bone conduction tests, which are updated versions of the tuning fork test. Finally, he or she will evaluate how well you're able to make out different words. A word discrimination test can determine the severity of hearing loss.

An understanding of the degree and severity of your hearing loss will allow you to choose the treatment that's most appropriate for you, whether it's medical intervention, hearing aids or another option.

Learn More About How to Avoid Hearing Loss